An Elegy in a City Junkyard 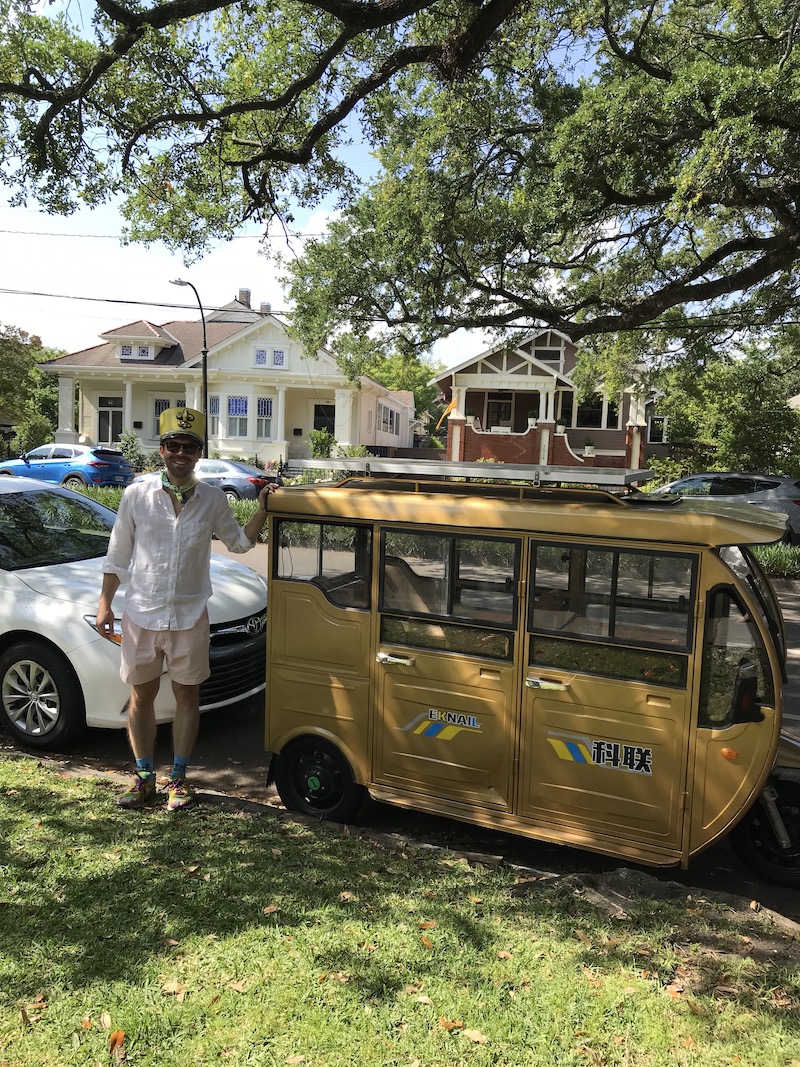 The curfew tolls the knell of parting day,

And leaves the world to darkness and to me.

Thomas Gray’s “Elegy in a Country Churchyard” deals with death the best way we know how: with iambic pentameter. Isn’t that everyone’s go-to?

I don’t know much about poetry. Even less about poetry of the non-rhyming variety. If it’s images and declarative statements we’re after, maybe switch to decaf and a teenager’s text thread?

Thankfully, Gray knows how to rhyme, at least for 1700s speakers (“leas” are grassy areas made for and to rhyme with trees). Gray uses iambic pentameter with heroic quatrains, to be exact.

But did he ever write a blog piece? Didn’t think so.

I’ve been sitting shiva with Gray’s elegy due to a death in the family.

After four years of ownership — and six months of mobility — my golden electric rickshaw has gone to the recycling plant in the sky (though it’s really just the city dump by way of a different truck, right?).

An Elegy in a City Junkyard.

And leaves the world to darkness and to me.

Friendly advice: when the 18th century plowman is making it home faster than your 21st century vehicle, it’s time to say goodbye. Pitch the elegy and jump straight to the dirge — and leave the world to darkness and to me.

Goldie, as I christened her (editor’s note: metaphorically, of course), was a flash of inspiration in a 25mph package. She might not have been fast, but she sure felt quick, her 10-ply aluminum panels shaking through the headwinds of the Greater New Orleans bike lanes.

During my four years in Rome, motorini roamed the streets like stray cats or fraternity parade-goers: suddenly appearing, slightly unsteady, unsanitary yet unavoidable. I did not return to the States dreaming of any Roman Holiday reenactment.

I returned dreaming of my vegetable cart.

If you head out early on a Roman morning, you’ll get a glimpse of vendors bringing their fruits and vegetables to the markets. Always, it seemed, they arrived in the most breathtaking of vehicles. A Maserati? A Ferrari? No, silly, a Vespa, with a fully enclosed cab and a bed in the back.

It only puttered along, it was always in industrial blue, and it could only fit a driver and his squash blossoms. But it kept the rain off. And it kept me dreaming.

Their homely joys, and destiny obscure;

Nor Grandeur hear with a disdainful smile

The short and simple annals of the poor.

Mellow Mushroom on Oak Street (may its memory be a blessing) had one out front for a while. But the waitstaff and bartender didn’t have any leads. Scooter shops would smile and nod as I described my missing person, but there was always this thing about U.S. Customs.

When I stopped looking, she finally showed up. Or her pink-painted sister, with a sign that said “4 Sale” in rainbow lettering, out in front of Buffa’s Bar.

It was love at first sight. And to think, I would have never said I was into pinks.

After one test-drive and series of questionable PayPal transactions, my golden chariot arrived, early January 2018. It might as well have been gold-plated, a feature that probably would have helped prevent the sizable dent on the back passenger-side door, acquired during shipping.

The boast of heraldry, the pomp of pow’r,

And all that beauty, all that wealth e’er gave,

The paths of glory lead but to the grave.

Battery-powered, via a DollarTree extension cord; solar-powered, via itty-bitty wires; comfortably seating two, or quite uncomfortably six, Goldie wasn’t just a dream made live. She was life made a dream.

There’s an oak tree on Peniston, one block off St. Charles, with a small concrete fronting. Too small for a Smart Car, too large for a stroller, it fit Goldie just right, giving me celebrity parking every magical Mardi Gras day. And, to be true, slight panic in the Napoleon bike lane every muddled Mardi Gras night, but Goldie never failed.

Until she finally did.

She made it to Ash Wednesday, but by Pentecost she was spirited away.

After a very Goldie Jazz Fest (the parking options!) and a Brunches with Goldie™ Lent (the Instagram options!), Goldie started telling me something.

I think it was in iambic pentameter. Only the good die young, only the good.

On the 4th of July, aware that Goldie was no longer up for the roundtrip of a St. Patrick’s wedding or even a green trip to the grocery, I decided to give her a long test drive. She had been slowing down, and when you start at 25mph, slowing is moving backwards. Did you really need to honk on your plod by, Plowman!?

I had finished Mass and started heading toward my parents’s Gentilly home. I realize the street connecting me to the other part of the city subsequently has been renamed Norman C. Francis, but that day, it was still very much Jeff Davis. Oppressive, segregating, something something about states’s rights, I heard the Plowman yell. It’s a sweaty, painful memory.

As I teetered over ol’ Jeff’s I-10 hump, something was clearly wrong. Momentum alone would not be getting me all the way to Gentilly. Recalculating, I announced to my on-board navigation system, which also doubled as an oscillating fan.

I took a u-turn by the Goodwill, briefly pondering what they might carry in a Chinese tin-can small, and just then, she stopped.

I had an off-the-wall teacher at Jesuit who explained the age limitation of the military draft in memorable fashion: you ask a middle-aged math teacher to climb that hill, and he’ll tell you where to take your orders. Goldie, turning down my order, was showing her age.

So I did what any sensible owner of an electric rickshaw would do. I got out and pushed.

I’m only driving a tricycle; it’s super-safe, like pre-school.

I would push from the back, and her wheel would start turning left. I would run up to the side to turn the wheel back straight, and she’d start scooting backwards. I’m not going to climb this hill, general!

If you have ever doubted, really doubted the constitutive goodness in people, file this one away. On a quiet July 4th morning, my miracle came. Two cars stopped, three guys got out, four guys got impolitely sweaty, one rickshaw made it back home. They pushed me up Davis’ damned hill and coasted me back to the garage.

Ok, I think I had to push her back into the garage, but I’m forever grateful those three opted for Good Samaritans and not good video content.

Slow-motion to three and a half years later, and it was finally time to let go. In a small city, there are only so many mechanics to annoy. I sold Goldie last week to the woman who sold me Goldie four years ago. She’ll be cut up for parts before being turned into a pedicab or an outdoor sitting area or an art installation. Mixed media, primarily spray paint on aluminum. The tutktuk presents a cautionary tale of driving too close and much too slowly to the sun. ca. 2018.

But she’ll always be a tin-encased dream to me, dashed only by the circumstances. Pretty much what Thomas Gray was saying, too.

“The next with dirges due in sad array

Slow thro’ the church-way path we saw him borne.

Approach and read (for thou canst read) the lay,

Grav’d on the stone beneath yon aged thorn.”

Speaking of deaths, that Saints season, huh? I had already laid out my outfit for this weekend’s rematch with the Rams (headlined by a striped ref’s shirt), but so it goes. To set an NFL record for number of starters in season, to finish with a winning record (remember, the Titans game was added as the 17th game; I’m calling it 9-7), and to miss the playoffs due to a 17-0 implosion from Hollywood’s favorite team, this was a season to pride.

As we add it to the “Hagiography of Sean Payton” (a working title I’d like to pitch to Netflix), let’s also remember it was our first season post-Drew, and we survived it. Speaking of hagiographical notes, Breesus once quieted the crowds at Lucy’s. Enjoy one of his many miracles at the end of a long, eventful, memorable season.

Finally, on our poetry topic, I’ve been doing a little research on the local federal judiciary. I like to stay active. Did you know the longest serving judge on the Federal Eastern District of Louisiana court, Martin Feldman, has dabbled in poetry? He claims one published work to his name, which I managed to track down on a website that may have been created when he took the bench and that certainly has stolen my credit card information. I reproduce it, rather than link it.

The lights are low, and full glasses clink

In a pub where our friends sit

The television sings, and Anyone speaks

Followed by no one’s coffee spoons

Never wanting to rise, it seems.

And whenever Anyone mentions a scandal,

“This world is a mess,” wise no ones conclude

(Profound judgement over a drink)-

Then back to noon’s heat and yesterday’s rain,

And praise for Anyones who think they think.

With the holidays fast approaching, we thought we would share our secret spots around the city to find the...
Restaurants

12 Days Until ChristmasFest Brings the North Pole to New Orleans

NEW ORLEANS (press release) – NOLA ChristmasFest, the region’s only indoor Christmas festival, is back and ready to usher in...
Music + Festivals

School of Rock Northshore is Ready to Rock N’ Roll