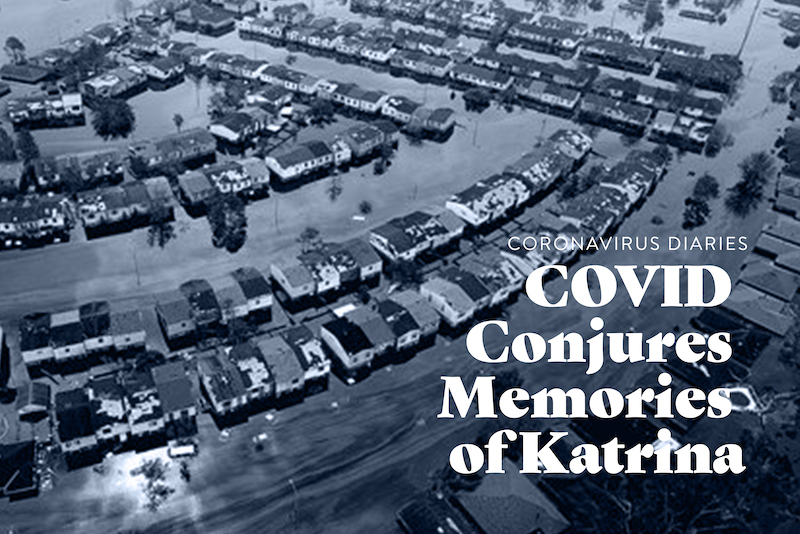 The coronavirus pandemic is a completely different disaster than Hurricane Katrina but there’s a lot about the spring of 2020 that reminds me of the fall of 2005.

Recently, I was remembering one event in particular:

A few days before the storm hit on Aug. 29, my wife and I hosted a pizza party at our house near City Park for three families from our school who lived in the area. It was a typical gathering for couples with young kids. I made pizza, the grownups drank a few beers and we discussed the details of a carpool (fun!) while the youngsters built an elaborate blanket fort in my son’s bedroom. They used pushpins to fasten blankets to the bunk bed, the walls and the ceiling. A few days later, when we realized we needed to hit the road, we grabbed the kids, the cat, the iMac from my home studio and left the house in a hurry.

We evacuated on the morning of Sunday, Aug. 29. Our destination: what may have been the last hotel room available in Jackson, Mississippi. We drove out of the city along the lake in New Orleans East and then joined the gridlock on I-10 and I-59. Somewhere along the way, we saw several guys holding up a sheet along the side of the road so an elderly relative could take care of “urgent business” in relative privacy. A three-hour trip took three times that long.

The storm hit later that night. By then, we had settled in at the Cabot Lodge, where the staff was feeding New Orleans refugees free hot dogs and potato chips. Since the hurricane had weakened by the time it came ashore, we thought our exile would be brief. But then, the next day, news broke that the levees had breached and the city was filling with water. On the TV in our hotel room, we saw a news broadcast of aerial footage of the city. When the helicopter flew over City Park, we saw flood water covering the bottom of the goal posts at Tad Gormley Stadium. Our house was across the street from Tad Gormley so we knew at that point that our whole neighborhood was submerged. I took a minute to process. … Or maybe, 15 years later, I haven’t finished processing yet. Not sure which.

A few weeks later, after my family and I had relocated from Jackson to Dallas, then Opelousas, then Baton Rouge and then Lafayette, I drove back into the city by myself to check on our house and retrieve a few precious items. Mud was still dripping from the oak trees as I pulled onto our street and parked the car.

There had been eight feet of water covering our neighborhood for weeks, so our front door was completely swollen and I couldn’t open it. As I was struggling, a van carrying a television news crew from Mexico happened to drive by. I signaled for help and a deal was made: the crew’s burly cameraman would smash my door in if I gave them a guided tour of my house and narrated the experience. Worked for me.

Everything about the next few minutes was surreal. I walked into what had been my family’s home a few weeks before and discovered it transformed into something from “Stranger Things.” Much of the furniture had been lifted by the floodwater and then moved all around the house. It was like we hired an interior designer from hell.

My wife’s antique player piano, stationed by the front door, was an exception. For some reason, the heirloom just disintegrated in place and hundreds (thousands?) of tiny player piano parts littered the floor. A similar fate befell my other musical instruments. I had the forethought to move them to the center of the house in case any windows broke but we never imagined there’d be eight feet of water all over, so I didn’t stash anything in the attic. The neck and body of my Telecaster guitar had come apart and were tethered together only by some rusty, gunked-up guitar strings. Water spilled out of a keyboard when I lifted it.

The kitchen, of course, was a mess: random objects on the counter, the cat food had rotted into a bright yellow pile of smelly goo. In the living room, carpets and drywall were wet and moldy.

As promised, I led the news crew through the whole disaster zone until we got to my son’s bedroom, where everything was similarly destroyed. Except for one thing … the blanket fort.

Of course, everything below the top bunk bed (furniture, Legos, stuffed animals) had become muck. But the blankets near the ceiling and attached to the top of the bed were untouched and perfectly preserved. It was bizarre. Like a split screen. Like the party from a few weeks earlier was still going on. Definitely worth an iPhone video if the technology had existed.

As it was, I pondered the scene it for a second, thought about how life can change in an instant and then went on with my day. I rifled through bedroom drawers until I found my grandfather’s wedding ring and I gathered a few important, albeit soggy, documents and photos. Then I “shut” the broken front door, got into our van and drove past a military roadblock and sped back toward my family’s temporary home next to a crawfish field outside of Lafayette.

It was just another day in the “new normal” of 2005. And as I reflect on that experience it really drives home a point: there’s a lot about the spring of 2020 that reminds me of the fall of 2005 but, truly, the coronavirus pandemic is a completely different disaster than the one that came before.

Katrina was so much more dramatic and “made for TV.” The site of bodies floating in the water and spray-painted Xs on front doors riveted the world and galvanized a relief effort. Years of rebuilding took a whole city’s resolve and is still an incomplete task for many. When it was all said and done, officials estimate the hurricane claimed the lives of 1,577 people in the state.

What it has done, however, is take the lives of more than 2,000 Louisiana residents. Significantly more than Katrina. And the number will keep rising.

It was a lot easier to see the destruction caused by Katrina but, despite the lack of drama, we are not yet safe yet from the current storm.

WESTWEGO, La (press release) – The Westbank Heritage Festival, a vibrant celebration of the Greater New Orleans Metropolitan area’s Westbank, is...
Things To Do

Ms. Linda Green the Ya-Ka-Mein Lady at the Ogden

On the Making of Gardens

A few months ago, I took up gardening. As any gardener will tell you, it’s a pursuit rife with...
Let Them Eat Cake

4 August Bridal Trunk Shows and a Taste of Cajun Pop

Though August may is considered a slow month for the city and our hospitality industry – because, heat ­–...
Editor’s Picks

6 of the Best Desserts in New Orleans

From king cake to crème brûlée, New Orleans is no stranger to the sweet life. And this week we're...