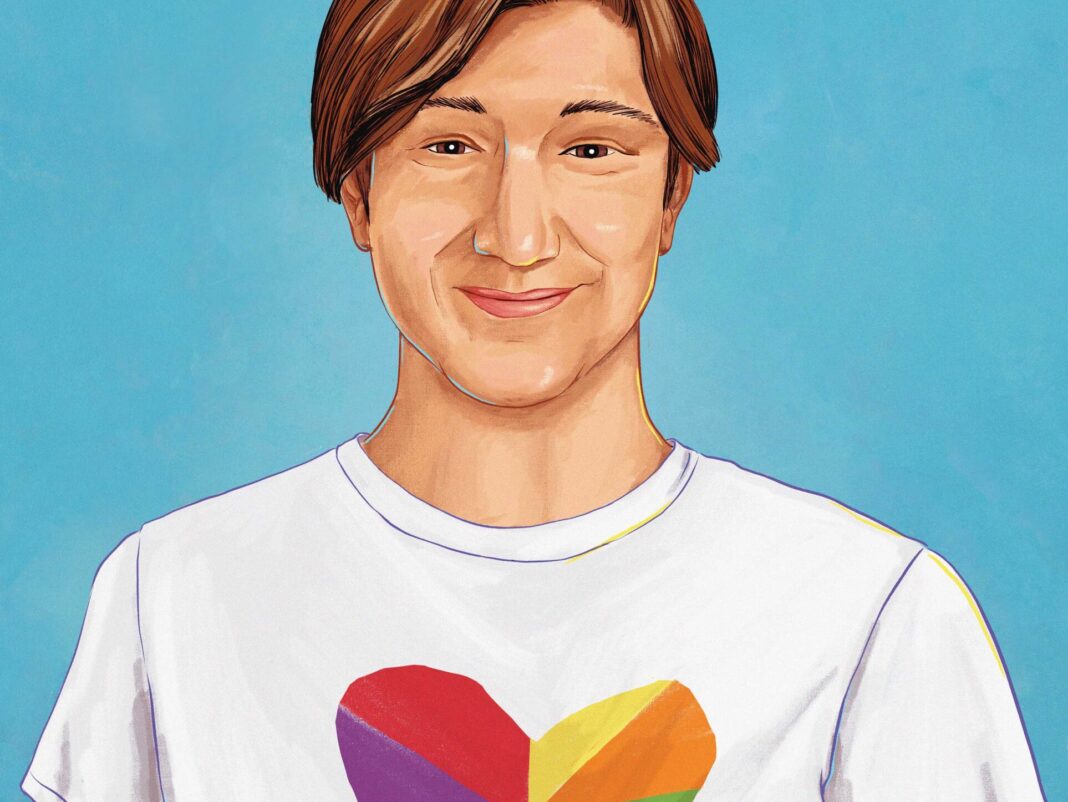 On a spring evening in 2020, my fiancé, Melanie, and I sat a COVID-safe distance away from my 97-year-old grandmother in my aunt’s backyard. I had just proposed to Melanie, but Grandma didn’t know that. In fact, my grandma, one of the people I loved the most, didn’t know I was a lesbian.

At least, we’d never talked about it. She just knew that I had married a man in my early twenties, had three kids, gotten divorced, and then never EVER got into another relationship ever again.

As far as she knew, Melanie was my friend. That evening Grandma sat in her wheelchair, cold glass of non-alcoholic beer in hand, and asked Melanie detailed questions about her job at the Audubon Zoo.

“I’m the assistant curator of the herpetology department,” Melanie said.

“She’s a herpetologist,” I said.

Even with hearing aids, we still had to scream most things to her, but in her defense, I didn’t know what herpetology was either. The first time Melanie said it to me, it sounded like she was disclosing a venereal disease that I should know about.

Grandma took a sip of beer. Then the idea seemed to register. She gave Melanie a confused look. “Snakes?”

Grandma had a certain kind of smile reserved for when she was amused and confused by what you just said. It was a very “I would never want to do that in a million years, but am intrigued by your decision to do so” kind of smile. After Melanie rattled off the scaliest, slimiest animals at the zoo, Grandma flashed her that smile.

I’ve never known anyone else to say the word “gad” when they’re surprised by something. Only in old movies.

As she asked Melanie question after question about where she grew up, what her family was like, and what it was like working with snakes, I got a warm, happy feeling watching two women I loved so much get along. It’s the feeling you get when you introduce someone you’re excited about to your family, wanting them to like each other, and they actually do.

The only thing was, I hadn’t told Grandma exactly what Melanie meant to me. About how we were going to get married. About how much she loved my kids and vice versa. About how Melanie and I wished we’d met earlier in our lives just so we could spend more time together before we died. That’s a dark thought, I know, but it was the beginning of the pandemic and we weren’t sure how this whole plague thing was going to shake out.

Why wasn’t I telling her? Grandma was cool. Afterall, she lived with Aunt Anne who came out to her in the 80’s. But in my mind, Aunt Anne was different because she was a lifelong lesbian. I’d been married to a man for ten years. I had children. As a good Catholic, I wasn’t sure what Grandma would think about that. This was the same person who, when I asked if she saw “The Wizard of Oz” in the movie theater when it first came out, she made a face and said, “I thought it was weird.”

While she talked to Melanie, and the cicadas began to sing in the yard, I remembered asking Grandma what that sound was when I was a kid. She told me that the insects were talking. She hunted doodle bugs with me and taught me how to open my eyes underwater. She played intense games of Monopoly and read Dr. Seuss to me and my sisters. She told me stories about growing up in Lakeview in the 1930’s, when a streetcar ran along one bank of the New Basin Canal while weeping willow trees lined the other.

I was 44 years old. I worked hard, had great kids, a fantastic group of friends, and a wonderful, amazing fiancée. But I was still haunted by this fear – what if Grandma only loved me because she didn’t know me? What if I told her I was gay and she didn’t love me anymore? There were people I had come out to over the years who, when I told them, I watched the look on their face change. “Oh,” they said, and in the moment of that “oh” their understanding of me was shifting in their minds. It was only a few of them. Honestly, most people in my life weren’t surprised when I came out. But my grandmother…would she give me that look? The one that unabashedly showed that I was being filed into a different category in a person’s mind? Would she still be proud of me? It didn’t matter that I was openly gay and proud in every other area in my life. When it came to Grandma, I wasn’t an adult. I was the child named after her own mother, Genevieve. It didn’t matter how many parades I marched in. When I sat across from my grandma, I just wanted to be her little Genny.

That fear had kept me silent for years and now I was afraid it was too late. She had become close to deaf. How would that conversation go?

“I’m gay,” I would say, hoping it was loud enough for her to hear.

Aunt Anne would lean over to her. “She’s gay!”

And so forth. I resolved that she might die before I ever had a chance to tell her.

At least she would get to know Melanie, though. We stayed until the sun went down, chatting, laughing, and screaming things so my grandma could hear them.

On our way home I took Melanie’s hand and said, “I should have hollered that we’re getting married. I’m sorry.”

Except that when your beloved hides you from their family in any way, it’s never really okay.

“Yeah,” she agreed. “That would be a rough conversation to yell back and forth about.”

“I know!” I said. “Do you think she’d be down to learn sign language so I can come out to her?”

“I’m okay with that. We’ll learn together, and we’ll bond, and bam! I’ll tell her I’m a lesbian and that you and I are getting married, and that this whole sign language thing was just been a carefully orchestrated way of coming out without having to yell.”

It turns out, I didn’t have to take such elaborate steps. A few minutes after we got home, Aunt Anne called.

This is what happened. While my grandmother sat in her chair, sipping her beverage, and apparently deaf to the world, she managed to hear Melanie say something to Aunt Anne about her future father-in-law. Then she noticed the ring on Melanie’s finger. When we left, Grandma asked Aunt Anne if Melanie was engaged. Aunt Anne saw an opportunity.

She said, “Melanie is engaged to Genny. They’re getting married.”

And that was all she said on the subject. Nothing changed. I was still her Genny. In fact, in what would be the last year of her life, sometimes I wondered if Grandma liked Melanie more than me. One time I came for a visit, kissed her on the forehead, and she looked around me. Seeing no one there she said, “Where’s Melanie?” I made a joke about me being chopped liver, but really, I was thrilled. She always asked about her, and worried about her doing too much at work. A faithful newspaper reader, she would clip any article she found about snakes and save it for Melanie.

When we lost Grandma a year later, I had the same kind of thought that I had when I met Melanie, when I wished I had met her earlier so we could have spent more years together. I wished I had come out to Grandma earlier. I mean, technically I never did come out to her. She had to ask. I wonder if she suspected before that. She was a smart lady and, I think, more worldly and hip than I gave her credit for. Since she’d been a Republican as long as I’d known her, I was shocked one day when she told me that she thought Donald Trump was “not a gentleman.” I’d never heard her say anything against a Republican candidate, no matter how ungentlemanly. But she knew what was up.

Though I wish I had been brave enough to tell her who I was and trust that she would still love me, I am relieved that she knew. When I try to describe how it feels that this lady who I loved so much, really knew me, accepted me, and loved my wife, there’s only one word that sums it up. Gad.

Genevieve Rheams received her MFA in Fiction from the University of New Orleans. Her short stories and personal essays have been featured in Sinister Wisdom, Hawaii Review, and the anthology Something in the Water. She was a finalist for the 2022 Saints and Sinners Literary Contest. As someone who loves to hear and perform live storytelling, you can find her at The Moth or Greetings, From Queer Mountain.

It's a big weekend for parades, as the Carnival season really kicks things into gear. Krewe Boheme rolls tonight,...
Restaurants

NEW ORLEANS (press release) – Palm&Pine is hosting events all through the Carnival season. P&P is THE Spot Before or...
Restaurants

Cochon Butcher Has You Covered for Carnival

Carnival season is a time for celebration. And what better way to celebrate your wedding than with Mardi Gras...
Bon Vivant

During the height of the pandemic, the thought — much less the practice — of sharing king cake with other...

Genevieve Rheams received her MFA in Fiction from the University of New Orleans. Her short stories and personal essays have been featured in Sinister Wisdom, Hawaii Review, and the anthology Something in the Water. She was a finalist for the 2022 Saints and Sinners Literary Contest. As someone who loves to hear and perform live storytelling, you can find her at The Moth or Greetings, From Queer Mountain.