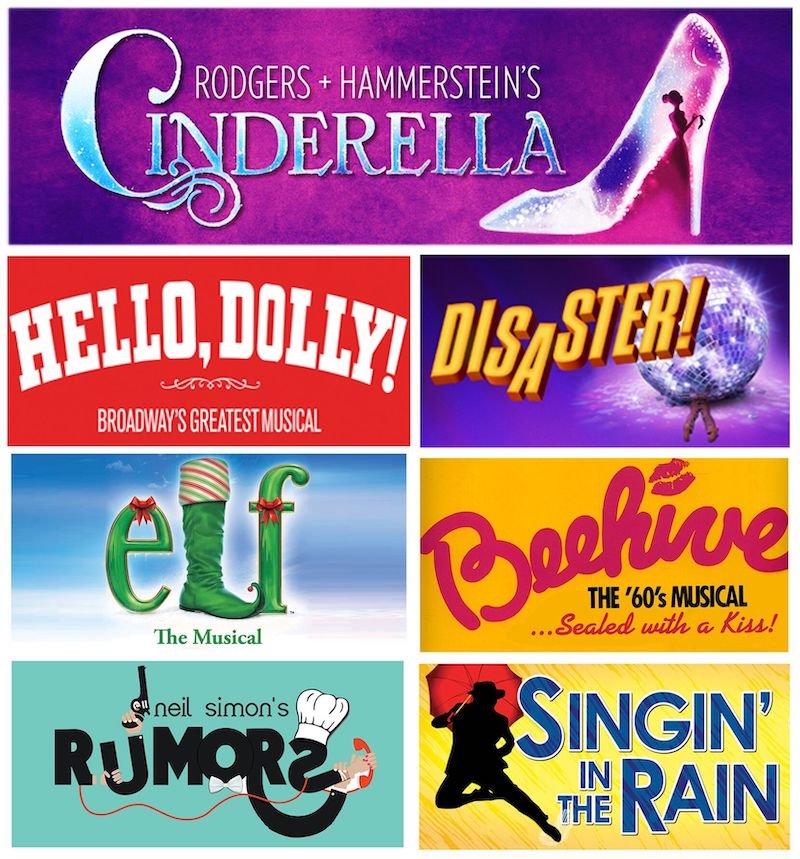 The sure-to be sellout line-up of award-winning musicals and plays are all enduring favorites rarely seen in New Orleans that pay homage to many of Broadway and Hollywood’s greatest playwrights, composers and lyricists.

“This year we polled our audiences for the shows they would like to see. We listened and delivered!   All of the shows in the upcoming season were top choices by our patrons, who are so very important to Rivertown Theaters. We are grateful for all the feedback and support,” added Fouchi.

“This season continues to carry out our mission in offering the highest-quality productions, featuring the incredibly gifted local performers throughout the metropolitan area,” Fouchi added.  “We continue to offer our young performers on-stage opportunities and nurture their talents.  It’s rewarding to see the young performers use the skills and experience they gain working in our children’s program, to perform aside the adults in our mainstage productions, as so many have this past season.”

Five, six, or seven show season packages are now on sale and may be purchased through the Rivertown Theaters website, www.rivertowntheaters.com  or by calling the box office at 461-9475.  The deadline for Renewing Season Subscriber tickets to keep their same seats is March 31.

Rivertown Theaters for the Performing Arts

Rodgers + Hammerstein’s Cinderella the Tony Award®-winning musical from the creators of South Pacific and The Sound of Music that delights audiences with its surprisingly contemporary take on the classic tale. This lush production features an incredible score, jaw-dropping transformations and all the moments you love—the pumpkin, the glass slipper, the masked ball and more—plus some surprising new twists and updated humor! Be transported back to your childhood as you rediscover some of Rodgers + Hammerstein’s most beloved songs, including “In My Own Little Corner,” “Impossible/It’s Possible” and “Ten Minutes Ago” in this hilarious and romantic experience for anyone who’s ever had a dream. Rated G

This Tony award winning classic bursts with humor, romance, energetic dance, and some of the greatest songs in musical theatre history. The romantic and comic exploits of Dolly Gallagher-Levi, turn-of-the-century matchmaker and “woman who arranges things,” are certain to thrill and entertain audiences of all ages. The show’s unforgettable songs by Jerry Herman include “Put On Your Sunday Clothes,” “Ribbons Down My Back,” “Before the Parade Passes By,” “Hello, Dolly!,” “Elegance,” and “It Only Takes a Moment”, Hello, Dolly! has been revived several times on Broadway, most recently in 2017, starring Bette Midler as Dolly Levi.  Rated G

Earthquakes, tidal waves, infernos and the unforgettable songs of the ’70s take center stage in Broadway’s side-splitting homage to classic disaster films.  Audiences and critics are wild for this hilarious homage to the era of bell-bottoms, platform shoes and the hustle. With larger-than-life characters, snappy dialogue and some of the most recognizable songs of the ’70s, Disaster! will have you dancing in your seat and rolling in the aisles.  Rated PG

Based on the beloved holiday film, this hilarious fish-out-of-water comedy follows Buddy the Elf in his quest to find his true identity. Elf features songs by Tony Award nominees Matthew Sklar (The Wedding Singer) and Chad Beguelin (Disney’s Aladdin on Broadway), with a book by Tony Award winners, Thomas Meehan (Annie, The Producers, Hairspray) and Bob Martin (The Drowsy Based Chaperone).  This modern-day holiday classic is sure to put the whole family in the Christmas spirit, and make them embrace their inner elf. After all, the best way to spread Christmas Cheer is singing loud for all to hear. Rated G

A wild toe-tapping, head shakin’ musical tribute to the rockin’ women who made the music of the era so special –everyone from Lesley Gore to Janis Joplin, from the Shirelles to the Supremes, Aretha Franklin to Tina Turner, and every woman in between!  With two dozen beloved hits, the show takes you on a journey through song, documenting the dramatic changes that America underwent during the ‘60s. Rated G

America’s premier comic playwright, Neil Simon, delights with a laugh out loud comedy of class and cover-ups in one of his most celebrated comedies. Four couples are invited to the townhouse of a deputy New York City mayor and his wife to attend a party celebrating their wedding anniversary. The party never gets started as the guests soon discover that the staff and hostess are missing and the host has shot himself in the earlobe. Comic complications arise when his lawyer’s cover-up attempt gets progressively more difficult to sustain as the other guests arrive and no one can remember who has been told what about whom. In true farcical fashion, doors slam and hilarity abounds as the couples get increasingly crazed in an effort to conceal the evening’s events from the local media and police. Rated PG

Singing in the Rain

What's the point of experiencing all the bars and restaurants New Orleans has to offer if you can't...
Theatre + Art

It’s simply too hot to do very much right now, which in my book means it’s art museum season. Louisiana...
Sponsored Content