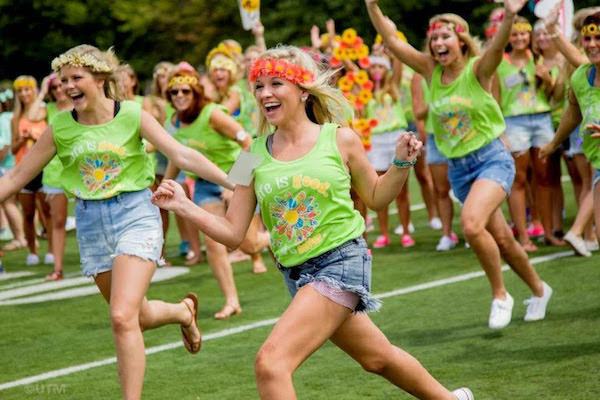 The other day while shopping I couldn’t help but overhear a conversation between a mother and her late-teens daughter. The daughter was on a fashion mission.

“On the first day I can wear shorts, but nice shorts. Like lacy, or flowy with a drawstring. Nothing too booty. Actually, no booty.”

I knew exactly what she was shopping for as soon as I heard the words “first day.”

Girl was gearing up for Rush, or Recruitment, or whatever they call it now.

Her mom stood there, a deer caught in headlights, with dressy rompers, chiffon sundresses, and three flowy blouses weighing down one arm and in the other, strappy sandals and wedges. No doubt this poor Mom was a Rush virgin. I could tell because she wasn’t arguing with her daughter.

Seasoned sorority Moms butt in. “You can’t wear shorts on the first day!” they might say, astonished because back when they went through Rush, dresses and pantyhose were worn every day. Shorts at Rush would be like wearing shorts to a Baptist church. You just don’t do that.

I couldn’t wear shorts to Rush, but I definitely didn’t wear pantyhose. Thank God at least that progression had been won. I then spent the next four years living with girls I called sisters and got into so many shenanigans, so much trouble, and I’d do it all again tomorrow. But there was plenty of smoke and mirrors, too, and not from any cliché headlines like hazing or excessive drinking. Sure, those things happen on some campuses, but they aren’t subject to sororities alone. They’re a product of teenagers given enormous freedom without training wheels. I’d have blacked out on my Bid Night too if alcohol had been something I’d had zero experience navigating before my parents set me free.

What is hidden behind pins and pledges is a set of standards and traditions – some outdated, some inspiring – but also layers of judgement that have little to do with any sorority at all, yet are handed down from one initiation class to the next. The judgement is a by-product of a culture in female groups in which an impressionable eighteen-year-old, struggling to survive it, might wonder if women have made any progress beyond the permission to wear shorts on the first day of Rush.

About a year ago, Kim Cattrall, the actress who brought boardroom and bedroom boss Samantha Jones in HBO’s “Sex and the City” to life and Sarah Jessica Parker (SJP), who played the show’s love-seeking writer, were having a spat on Twitter. It was preceded by a dis by Cattrall on SJP when she said in an interview that they “were never really friends.” Instantly the word “catfight” was being thrown around by everyone – women, men, media, trolls. Who doesn’t love a juicy girl on girl squabble, right? It’s why Bravo TV now has its own freaking festival.

The word “catfight” and the attention to the actresses’ drama was and remains nothing new in the female world. Maybe we’re bunkmates with our best friend at sleep-away camp and just as summer is hitting its sweet spot, drama ensues. Our bestie sat beside a different girl in the Mess Hall, one who wears a bra and has experience with boys. In high school, a clique spreads rumors about a girl whom they phased out of their group weeks ago. As adults the drama divides us: those who stay home and those who work in the real world. Within those worlds–the real and the supposed make-believe–we continue to sabotage. “She slept her way to the top” or “She doesn’t even buy organic milk.” Smack dab between our seasons of mean girl, right when we’ve reached the pinnacle of insecurities and vulnerability, we put two hundred young women in a house and try to build leaders from the catfights. We give them a ritual, philanthropy, and sisterhood as a soft landing, but the fluff can’t stifle the drama.

Think I’m exaggerating? Go back, way back, to that first super emotional fight you had with a girlfriend – the kind where you’re so angry tears build up in your eyes. What was that fight about? Then think about all of your female relationships up to today – the arguments, gossip, and how it was resolved or unresolved. Finally, look at where as a gender, women are now and ask yourself if you’re truly satisfied with how you are treated, how we treat one another, and how we are depicted. From that very first argument over God knows what to now, how many of those arguments sprouted from anything objective? I’m guessing close to zero. She’s skinnier than I am? I’ll cut her down. She’s clawing her way into this office? Just try. Nothing is safe from sabotage – our bodies, our line of work, our sexual expression, and even motherhood.

Why all the drama?

Long ago, before the first catfight, a portrayal was taking shape. Our book was being written for us before we had the opportunity to give input. It was decided for us how we should look, behave and what our callings should be. But left out of the pages was what we would want. It’s been a long, bumpy road, paved by brave women who starved themselves in protest or died so that you and I could have a smoother path. But we can do better. Just as it’s irresponsible to send kids without better judgement into an environment where alcohol and drugs are present, we are missing the mark when we don’t train our younger sisters to reconsider why their judgements of one another exist at all. We don’t have to play the characters in the book. Hell, we can burn the book.

Are we all to blame all of the time? Of course not. But subconsciously we’ve padded our portrayals. We believe we need beach bods while eyerolling those who sport them flawlessly instead of worrying about our own bodies. We believe in family so passionately that we snub women who don’t. We believe monogamy is a benchmark and slut shame those who never settle down. The ones who do settle down are sellouts. And ultimately, we hit a certain age and diffuse our moxie, quieting the opinionated girl inside because, otherwise, we’re too much. Then we wonder why we can’t trust each other, why we gossip, why we backstab, and why tabloids dub our actions “catfights.”

Like it or not, we haven’t burned that bullshit book to the ground. We haven’t hit our stride where what we put out is what we want to take in. The story of women shouldn’t go to press until we stop judging one another based on our own insecurities rather than how fabulous our female friends do what they do best.

I know enough to know that like a sorority, the female world was created from a set of standards that we had nothing to do with, yet its destiny is up to us. Like no more pantyhose at Rush week, we can progress our portrayals and ultimately change opinions. Catfights and female hysteria wouldn’t be news if hundreds of years ago when women lost their shit they weren’t sent to a nunnery–which was code for insane asylum. If instead, women could have shared their opinions and been regarded as equals, we may not have needed sororities to form circles of commonality for ambitious girls at all. Or maybe we still would have. Because regardless of how we rewrite the book, I like to think that women want to celebrate each other–kindred spirits as our best portrayal.

That, and victorious gender rules changers. Starting with shorts at Rush week.

Since the 1849, Southern Yacht Club has hosted the biennial tradition of the Commodore’s Ball as a formal passing...

The Skinny on Skincare

Our skincare journeys aren’t always paths paved with 24- karat gold primer. On occasion they may even resemble a...

Each year, the Hispanic Apostolate of New Orleans celebrates with a gala dedicated to the Hispanic children attending Catholic...