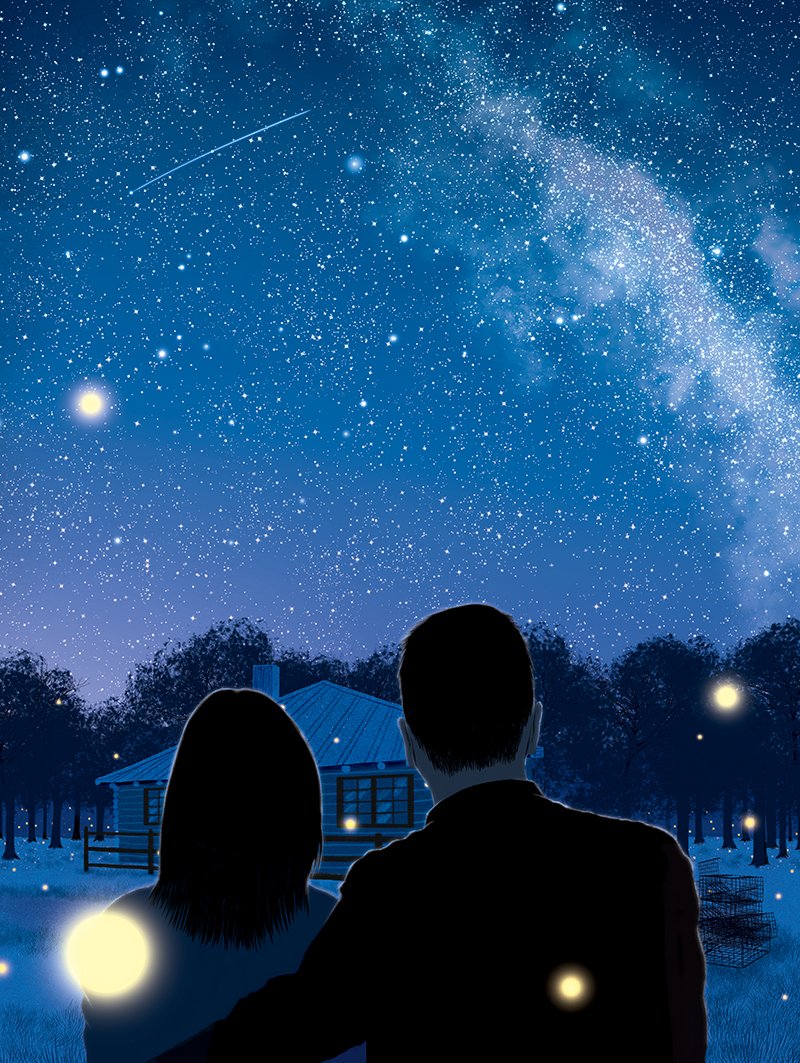 It’s not a commuters’ paradise like Mandeville. It doesn’t have that upscale boutique vibe like Covington. If you’re looking for big box stores or movie theaters, try Slidell.

It’s not deliberately eccentric like Abita Springs. It doesn’t have pastures and ponies like Folsom. No wooden boats like Madisonville. But it does have its own post office. And two strings of lights across the main street during Christmas.

So there’s that. But much, much more. And much, much less. And that’s the charm of Lacombe, Louisiana, my favorite faraway place that’s actually really close.

Straddled along the motor raceway known as U.S. 190, a high speed back-a-town dusty two-lane connector between Mandeville and Slidell – a former trading route for the French, Choctaw and British and now a road where everyone seems to be in a hurry to get somewhere else – Lacombe is a sleepy town in all the right ways. It’s a place to pretend you’re in the country even though you can see the glow of New Orleans’ city lights on a clear evening.

It’s the closest place to the city that you could call bucolic.

Although this stretch of 190 is home to a few of St. Tammany Parish’s more notable and historic commercial destinations – Banting’s Nursery, Sal & Judy’s restaurant, and the now-shuttered fine dining bistro, La Provence – much of it has the feel of, and looks like, 1952. All that’s missing is an old abandoned Sinclair gas station with its green dinosaur logo looming over the one traffic light in town.

Except there are no traffic lights in town.

There are dirt driveways that disappear into nowhere. More rust per square mile than anywhere outside of Pittsburgh. Stacks of crab traps in front yards that look like model cities made of iron and wire. Old threadbare houses with patches of missing sideboard where you’d swear nobody lives, but somebody does. Seafood vendors that look like they closed decades ago, but they didn’t. The mildly haunting (and haunted?) Star Motel, where you’d swear nobody stays, but somebody does. And the sublimely named Alice’s Restaurant – looking dark, shuttered, vacant and lonely to late afternoon or evening passersby – but bustling with locals trading news and gossip over hot coffee and scrambled eggs every morning.

Little more than a half-hour drive from New Orleans, it’s inevitable that Lacombe would share at least some characteristics of the city. But it does so with a Bizarro World inversity. For instance, many neighbors here don’t know each other, don’t even know each others’ names. But that’s because they can’t see each others’ houses.

You can hear gunshots on a daily basis, but it’s target practice, maybe hunting, not a turf war. The sounds of morning are whistling cardinals, the roar of pickups and Harleys down 190, and the pop-pop-pop of shotguns and pistols. The local gunsmith, across the highway from where I stay, assures me that it’s legal to fire a weapon outdoors if it’s more than 200 yards from the adjacent property.

Lots of people here live more than 200 yards from the adjacent property.

As someone firmly rooted to the pavement all of my life – andconstitutionally averse to the Northshore over my three and half decades in New Orleans – I found my way to Lacombe the way people all over the world find their way to new places. I met a girl.

She lives in the woods, in a veritable bamboo forest, in not so much a house as a cabin – let’s go with “dwelling” – built in1880, with floorboards leaning this way and that, with a fresh water well and underground septic, and heated solely by a giant wood-burning stove that serves as the centerpiece of her home.

A STACK IN THE TRUNK

We get the fire wood from a guy down the highway who leaves stacks of logs out on the side of the road where there’s an old black mailbox with a note asking folks to pay for what they take, twenty bucks a stack. One cold night last winter, I didn’t have the cash on me so I piled a stack in my trunk and left a note with my phone number and told him to call if he had any concerns and that I’d come back to square up.

He didn’t, and I did. There’s no uncertain charm to living a life like that in 2019. Trust thy neighbor. But leave him – or her – pretty much alone.

In the five years Janelle has lived in Lacombe, three people have breached her driveway: A guy just recently, asking for her vote for St. Tammany Parish Councilman; a woman with a flat tire who later returned with a gift of fresh fish as thanks for the help; and a random drifter walking down the highway a while back who seemed to want nothing more than a conversation.

Lacombe probably has a higher rate of random highway drifters than most of St. Tammany Parish, guys walking down the road carrying a duffel bag or maybe just a bicycle tire, headed who knows where. That’s part of its charm. (Yeah, I know – until someone gets hurt. But nobody’s got hurt yet.)

Janelle is the girl. She lives here. I live in the city. So we swap, back and forth across the Causeway, which I have crossed more in the past three years than I had in the prior 30. A circumstance I would have sworn upon the Good Book would never happen in my lifetime. But hey, stuff happens.

Another new and unlikely member of the community is John Boutte, the soul singer, gospel singer, the angelic voice and muse of Frenchmen Street.

The Boutte name has been synonymous with New Orleans 7th Ward for as long as the Neville name has been steadfastly 13th Ward. A family of renown singers – Tricia, Lillian to name a couple – most Bouttes got flushed out after Katrina. John bounced around New Orleans for a little over a decade and then in 2016, made the leap. Across the lake To Lacombe, where he settled on a cozy expanse of 22 acres that he bought from a retired Italian grocer.

The grocer used the property as a weekend getaway for his friends – the ultimate rural man cave – building five golf greens that, with tee boxes distributed at different locations from different angles comprised an 18-hole golf course. He built a “clubhouse” and ran poker games and crab boils. Boutte now lives in the clubhouse.

He wanders the backwoods each morning with his walking stick, lording over the gardens and goldfish ponds and vast woods, feeling like he made it to Paradise before he even died.

“I never thought I would live anywhere but New Orleans, but I found this place and found out that I could breathe again,” he said, taking a break from auditioning a new guitar player – and grilling corn – to show me around the place, the woods, the ponds, the garden, the greens – and the shooting range, natch.

He’s way more than 200 yards from his neighbor.

“I miss the food in the city, and meeting people on the street every day,” he said. “But I don’t miss the noise and the hustle and the bustle. I hear songbirds in the morning, crickets all day, and I can see the Milky Way at night. I never thought I would live a life like this. But it’s so good for my health, good for my peace, good for my spirit, and good for my voice.”

The voice of John Boutte – farmer, greens keeper, country squire, converted and committed Lacombian. Or whatever folks here are called. Who would have ever thought?

One who knows the answer to that question is Charles Greer. He’s a Lacombe lifer, the son of a West Bank mother and Kenner dad who settled in Lacombe a generation ago to raise a family. Born in Lacombe, schooled in Lacombe, employed in Lacombe, Greer left Lacombe only once in his life – to join the Navy, a military branch he chose because he had spent his entire youth on the water.

But even after seeing the great wide world in the service, he came back here. “I don’t know exactly why I came back here after the Navy,” he reflects. “I just wanted to come home. This place may be just a dot on a map on a piece of paper, a census-designated place that’s not even a town, it’s a village, but there is something about this place – family, history, community – that keeps you here.”

The only time he ever leaves town – er, the village – now is to head out on the water as a deckhand on a crab boat. The water – Bayou Lacombe, Big Branch, Lake Pontchartrain – is the life he has known and cherished for his 38 years.

“When we were kids and teens, we got on our bikes and rode to the Bayou or down Lake Road to go crabbing or fishing. And that’s pretty much what we still do. Everything is outdoors here. Hunting. Trapping. It’s wide open. It’s a place you can breathe.”

It seems that breathing should be one of the Lacombe chamber of commerce’s marketing pitches. If Lacombe had a chamber of commerce, that is. But it’s more a loose patch of independent small businesses – save a Subway and a couple of national retail stores whose names begin with Dollar. And there’s Bayou Adventure.

Bayou Adventure, at the bend in 190 by the old cemetery full of French and Choctaw names and families mostly lost to time, is Lacombe’s de facto village commons – an old gas station converted into a bait shop, pizza joint, purveyor of craft beers, kayak and bike rentals, Friday night crawfish boils, the place where old locals drop by to brag about the big one that got away – or even get married.

That is, unless you’d prefer that Bayou Adventure proprietor Shannon Bordelon – a mail order minister – conduct a waterborne nuptial ceremony under the moon in the tranquil drift of the Big Branch, the bride not so much walked down the aisle as paddled.

Yup, that’s a thing here in Lacombe. Marry at the bait shop. Or in a kayak. Hit balls on your DIY golf range. Shoot the breeze or just shoot. It’s all so close to New Orleans. But so far away.

A place out of time, in our times. And what could possibly be better than that?

One night, I was out in Janelle’s yard, staring, marveling, at the stars above. The same stars over New Orleans that we can’t see. It was transcendent, incandescent. I started to say something and she said to me what she often does: Stop talking.

And I did. And I listened. And, at night with no Harleys and target practice, I heard the sound of pure night. The sound of almost nothing.

And I could feel myself breathing again.

Even for the most faithful tennis players, the July and August heat can call it all into question. The...
Community

NEW ORLEANS (press release) – The Press Club of New Orleans is pleased to announce that it will fund three $2,500 scholarships...
Restaurants

NEW ORLEANS (press release) –  In celebration of one year, the Mister Mao will offer diners a three-course anniversary prix-fixe, along...
Let Them Eat Cake

Wediquette Wednesday: Is it OK to write a note in on the R.S.V.P. card?

Brunch All Week at Gris-Gris

You may not like brunch; most chefs don’t, but you cannot deny that it is popular. Some say that’s...