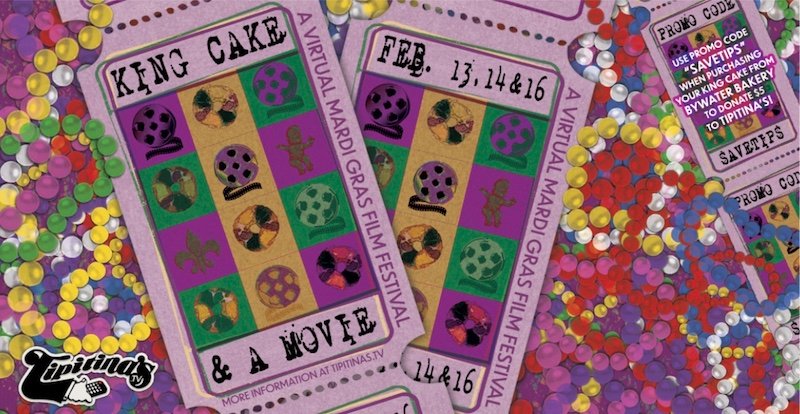 Beginning Saturday, February 13, viewers can tune in to Tipitina’s.TV and watch a free movie marathon starting at 10AM CST. Along with full length features covering topics from Mardi Gras to some of NOLA’s most recognizable musicians, the series will also broadcast select shows and clips pulled from the extensive Tipitina’s archives to give the viewer an immersive experience. These movies will only be available for a lim- ited amount of time.

The full schedule and viewing times for the stream are featured below along with a summary of the films, and links and more information can be found at www.Tipiti- nas.TV.

To celebrate the event, Tipitina’s has also partnered with Bywater Bakery (www.bywaterbakery.com) to offer shipping for King Cake orders placed through their website. Customers who use the promo code SAVETIPS at checkout will ensure a por- tion of the proceeds go to Tipitina’s.

7pm All On A Mardi Gras Day

All On A Mardi Gras Day (60 min)
In a gentrifying New Orleans, Demond sacrifices to be Big Chief in a secret culture called Mardi Gras Indians: African-American men who spend all year sewing feathered suits they’ll wear once, in a battle to decide who’s “the prettiest.” (from IMDb)

American Patchwork: Jazz Parades “Feet Don’t Fail Me Now” (58 min)
A celebration of New Orleans’ musical culture from its piano bars and barrelhouses to brass bands and street parades, with their colorful, riotous, and symbolic second lines, in which the community plays an essential part in the performance. Shot in the thick of funeral parades and nightclubs, with performances by the Preservation Hall Jazz Band, the Dirty Dozen Brass Band, and Danny Barker, Feet Don’t Fail Me Now tells the story of New Orleans’ utterly unique and valuable jazz heritage. (by Anonymous)

Buckjumping (1 hr, 7 min)
Buckjumping is a cinematic journey through the soul of New Orleans. The film explores different communities as they express themselves through movement, painting a dynamic portrait of a city’s spirituality, defiance and resourcefulness. (from IMDb)

About The Films (continued):

Bury the Hatchet (1 hr, 27 min)
Bury The Hatchet follows Big Chiefs Alfred Doucette, Victor Harris and Monk Boudreaux over the course of five years, both pre and post Hurricane Katrina, and is an exploration of their art and philosophies, as well as their struggles within their communities: harassment by the police, vio- lence amongst themselves, gentrification of their neighborhoods, uninterested youth, old age and natural disaster. (from Wikipedia)

Never A Dull Moment: 20 Years of The Rebirth Brass Band (1 hr, 30 min)
Never a Dull Moment is a documentary on the Rebirth Brass Band, but it’s little more than that. It tells the story of the band from its inception at Joseph Clark High School, through its growth peri- ods at Treme bars as teenagers, to the band becoming a local institution. It should be a really good story, with teenagers almost immediately immersed in the adult nightclub world, complete with the inevitable tensions that accompany bands with a lot of members becoming successful. Unfortunately, the movie is little more than a celebration of the band, conveying little of the life and drama that surrounded the band’s evolution. (by Jan Ramsey)

The Promised Land: A Swamp Pop Journey (1 hr, 17 min)
The Promised Land is a film that takes you to the heart of South Louisiana’s musical phe- nomenon – Swamp Pop. Filmed in South-west Louisiana we meet this super group of cult and underground heroes and observe their lives, their music, their culture. (from IMDb)

Tuba to Cuba (1 hr, 24 min)
A Tuba to Cuba follows New Orleans’ famed Preservation Hall Jazz Band as they retrace their musical roots from the storied city of jazz to the shores of Cuba and in turn discover a connection that runs much deeper than could have been imagined. (from IMDb)

Up From The Street (1 hr, 44 min)
A film looking at the culture of New Orleans thru the lens of music. Hosted by Oscar nominee and 6-time Grammy Winner Terence Blanchard, the film tells the story of how music and culture inter- sected to create a distinct form of expression. (from IMDb)

Pantone Announces 2023 Color of the Year

Each year, we (not-so) patiently wait for the Pantone Color Institute to announce its pick for top color for...
Theatre + Art

Son of a Saint to Host Annual Gala on Dec. 9

It’s that time of year again to give to those in need and for gifting to or tipping those...