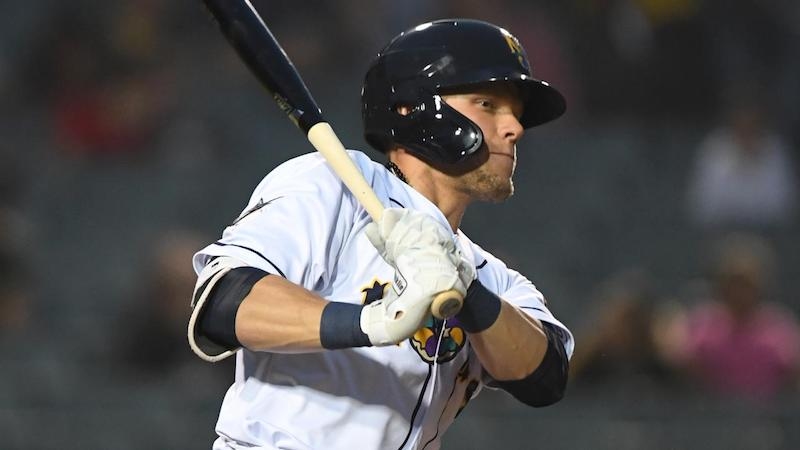 Last week the team formerly known as the New Orleans Zephyrs but now called the Baby Cakes opened what will likely be its final season here. The franchise, so it has been announced, will be moving to Wichita, Kansas where a new ball park is under construction and a name change will mercifully be applied. In the end, the region’s experiment with Triple-A level minor league baseball just did not work out that well, even though we built a new ball par financed from the re-sale of domed stadium bounds and standing within the shadow of the Saints’ facility. (Figuratively, being in the shadow of the Saints is now part of the equation for any sports operation in town.)

News of the opening day brought to mind the original opening weekend of the relocated Zephyr franchise when I made the season’s first error, albeit in the press box.

Perhaps it wasn’t the best choice of shirts to wear. During the Zephyrs’ 1993 debut in New Orleans the team’s home games were played at UNO’s ballpark as they were for a couple of years after until the stadium on Airline Drive was built.

For one of the early games I had a chance to sit in the small press box. Because the franchise had relocated from Denver, I had reached in my closet for a Colorado Rockies t-shirt that a cousin had given me.

That season was the first for the Rockies who were an expansion major league franchise. Prior to the big league team’s arrival, the Denver Zephyrs, a triple-A minor league franchise played in the Mile High City. With the coming of the Rockies the Zephyrs had to move elsewhere. New Orleans at the time was the largest city in the nation without any professional baseball team, minor league or major, so the move seemed natural.

A Denver businessman named John Dikeou owned the relocated Zephyrs. He was seated in the press box a few seats away from me. As the game began, I noticed when he called one of his staff people aside and began what I overheard as being an angry murmur. I couldn’t understand everything he was saying, but I did grasp two words that were muttered frequently, “Colorado Rockies.”

Moments later the aide came and talked to me. Mr. Dikeou, it turned out was hardly a Rockies fans. There had been contentious negotiations between him and the new club.

From our conversation I got the impression that Dikeou worried that either I was some sort of wise guy rubbing it in by wearing the shirt or, worse yet, someone from the Denver media trying to stir up something. I assured the aide that I was neither. The rest of the game went peacefully, though Mr. Diekou and I never made eye contact.

He eventually sold the team and headed back to Denver. Left behind was a franchise with a name that tuned out to be an amazing coincidence.

UNO’s ball park is located across the street from the site of what was the old Pontchatrain Beach amusement park. The park’s signature ride was a roller coaster that raced along a winding track supported by a sprawling white wooden lattice frame. The ride’s name was the Zephyr. A true rite of passage for those growing up in New Orleans was to ride “the big Zephyr.”

Anyone sitting on the first base side of the UNO ballpark would face the site where the Zephyr once rolled. It was natural for fans to assume that the ball club was named after the ride.

In fact, the team was named after a Greek phrase for west winds. The Rockie mountains were known for having such “zephyrs.”

(The Denver Zephyr, a passenger train that once raced through the Rockies, popularized the name.)

Curiously wind, albeit from the south, would have an effect on the New Orleans franchise’s biggest moment. In 1998 the team won the Triple-A World Series by beating the Buffalo Bisons three games to one. Only, when the victorious club returned home there were no adoring fans waiting to greet the players. Hurricane Georges was spinning in the gulf and authorities had advised local folks to leave town.

Had it not been for Georges the area might have celebrated a championship that no one remembers now. From then on things went less well. One theory is that New Orleans has become too much of a major league city, yet too small of an economy, to support minor league baseball too. With the escalated success of the Saints and the coming of the NBA, interest, and sponsorship dollars, were diverted. Wichita might indeed be a better fit.

Still, there were good moments to be endured through the team’s stay here. A hot dog, a beer, a home run – the ongoing life drama of young men trying to make it to the big leagues – a theme that is played out in many forms and in many lives.

Baseball nowadays is being slammed in getting national attention by football, but the game has to be appreciated in the right frame of mind. It is more like riding a train than being in a jet. The pace is slower, but that’s all the better for individual attention to the landscape. Every player has their moment in the spotlight, either when at bat or on the pitcher’s mound. In football anyone that’s not a quarterback, kicker or receiver is lost in the huddle. You can’t be in a hurry to enjoy a baseball game, all the better for another hot dog.

I will miss the franchise, even if it is called, gulp, Baby Cakes. Too bad the team never had a chance to produce championship memorabilia. I could have used a new t-shirt.

Discover how to prioritize wellness conveniently with telemedicine.
Sponsored Content

As Winter flavors come to the forefront of menus around the city, consider these restaurants as top contenders.
Partner Content

Story of Hope of the Month

They want me to talk like I’ve never read a book. Seminarian exit interviews were the best interviews. Think postgame...